As its name indicates it, the association Liaisons urbaines was established to develop links between the urban said disciplines and the actors of the international urban scene.

More exactly anchored in the artistic disciplines of the Hip-Hop culture, our association aims at developing activities around these to bring to the foreground the positive, creative, educational and public-spirited aspects, in an objective of social cohesion. For this, we have been exploring any useful means since 2012 and the beginnings of our Geneva Summer Break Festival event which was the spearhead of our action bringing together generations, disciplines, teaching methods, nations.

It all started in 2010. Vega Roc, then in social formation at the ATB leisure center, got along with his former, Giordano Furlanetto, to develop a breakdance learning workshop concept. The workshop goes well and so Vega also reports on the lack of dynamism of the Break community during the summer months in Geneva.

A few pages later and the agreement of a small funding, the ATB launches in 2012 the Summer Break, an outdoor dance space, traveling through the city with lino floor, sound system and DJ. Several partnerships facilitate the implementation of the event in very diverse places of the city. Following the 2012 and 2013 editions, ATB decided to let Vega manage the Summer Break by creating his own association, Liaisons urbaines.

Six years later, the Geneva Summer Break Festival is in place during the summer in Geneva, with two youth camps, an international jam and dance masterclasses. What is a jam? It's simply the meeting of artists who come to share a convivial moment around their art. The Summer Break jam, specializing in Hip Hop disciplines, offers Break, Graffiti, Drawing, Djing and Rocking.

And then masterclasses? These are classes as the name suggests, around Rocking or Breaking, given by masters in the field.

And the ATB in there? Well, the ATB has so far been a strong and essential partner in terms of equipment and logistics, without which Liaisons urbaines would not have managed to continue the Summer Break. ATB is also an important partner in the communication of the youth activities of the association.

So a big thank you to the ATB team !!

For a harmonious development of the artistic disciplines of Hip Hop culture and to ensure the link between each, Liaisons Urbaines started in 2015 its youth camps with "Break & Hip Hop" in partnership with Caritas-Jeunesse. In 2016, Graff Week also joined the Liaisons Urbaines summer offer.

Transmission to younger generations and development of Hip Hop specific pedagogies has become a major issue facing the popularization of these disciplines.

At the same time, the personal development that these disciplines make possible is a reality that we could not leave behind. To know thy self better, to persevere, to respect the ancients, to widen one's horizons through knowledge, is among others, what our camps allow; without forgetting the dimension of sharing and living together. 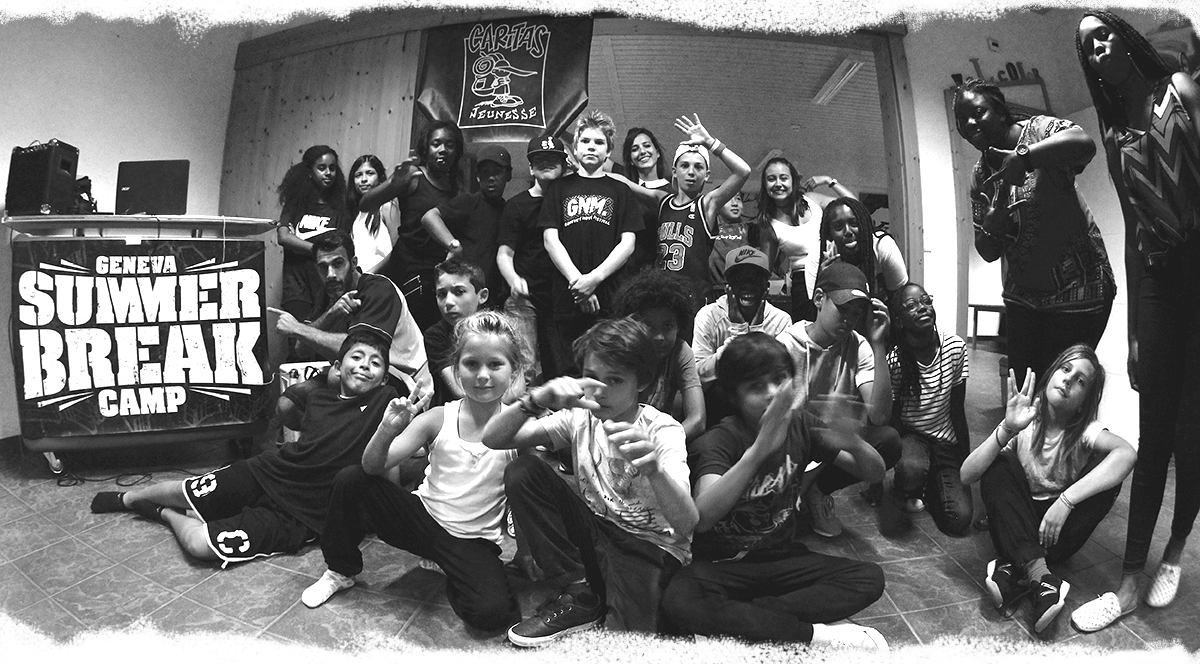 The outdoor jam
an exchange between 4 disciplines

An artistic village bringing all the intensity of the Hip-Hop culture through the most beautiful spots of Geneva Lake. 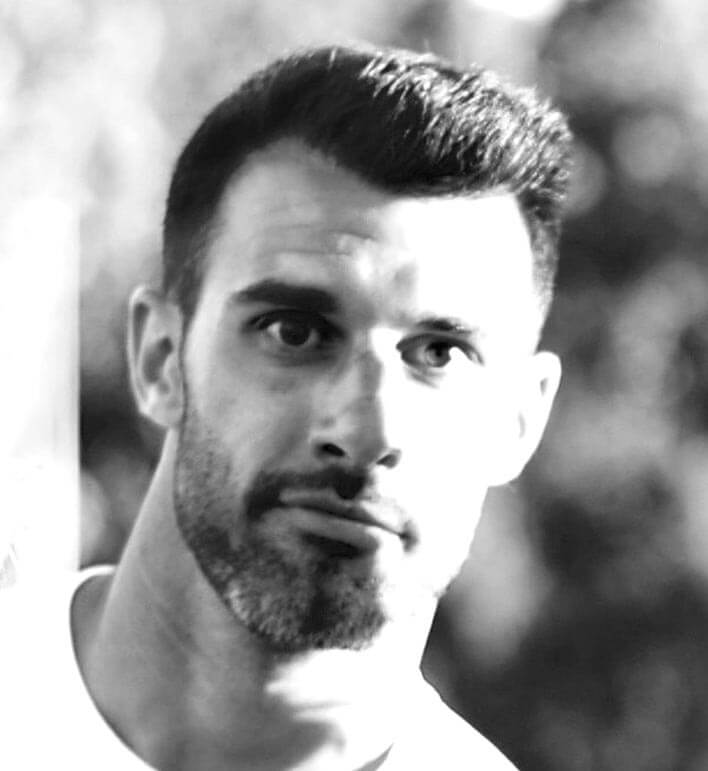 He started dancing in 1999, in France and quickly continued his training in Switzerland: Avanchets and Balexert, the high point of the Geneva Break.

Not very competitive, he prefers to dance in the parties to enjoy the musical selections of the DJs and share the dance with his friends. His style research drives him to stay close to an original style of the 90s BBoys while taking inspiration from the current Breakers.

He has taught courses in various structures since 2007 and created in 2010 the Atelier Break, for a Leisure Center.

Graduated in social work, he constantly questions the construction of Hip Hop culture and tries to identify the stakes for his actors and the public. For a greater participation in this culture, he undertakes to develop Hip Hop jams which will begin in 2012 under the name of Summer Break. 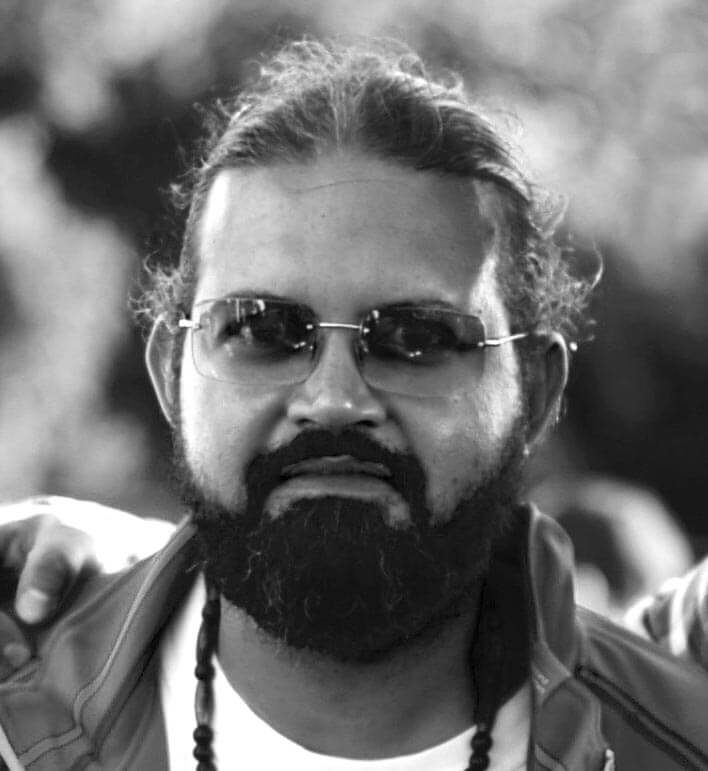 He discovered Hip-Hop in the mid-90s and began to collect vinyl records. He works his technique while deepening and widening his musical universes.

He is a Geneva-based activist who has become an international DJ since 2014, when he begins to be a frequent guest abroad. Its particularity: he mixes exclusively in vinyl.

Organizer of events for urban culture, he meets VEGA ROC in 2012, who calls on him to mix on the Summer Break. Sharing the same vision of Hip Hop and both wanting to bring newness to the environment, it is naturally that they join forces to found LIAISONS URBAINES in 2013. 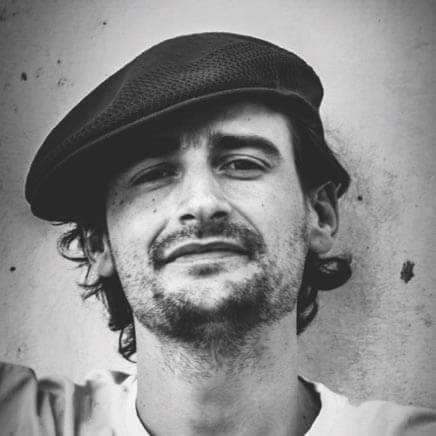 Serval first gets involved with graffiti in 1992 with an unmis-takable style : letters with pure graceful curves, surprising and deep color schemes and often themes that put forward his work as an illustrator. Published in numerous books and reviews, his work is regularly shown in art galleries around the world, Serval is also known for his involvement in urban cultures. He is one of two Swiss artists recognized in the Guide to Contemporary Urban Art 2013 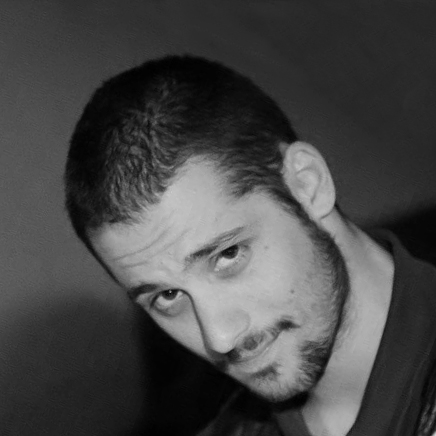 Around 2006, he started in BBoying and it is in 2009, during a dance camp, that he really discovers the extent of the Hip Hop culture, and his wish grows to going to New York to meet the pioneers of this culture and to perfect his knowledge.

In 2012, his dream comes true. He spent six months with the legendary Crew "The Bronx Boys Rocking Crew" (TBB) and "Master Mind Rockers" (MMR). As the first member of MMR in Switzerland, he was given the task of developing the ROCKING or ROCK DANCE.

He meets VEGA ROC during the Summer Break sessions and in 2014, enthusiastic about what he is doing to develop the Hip Hop culture in Switzerland, he offers him, from 2015, his support to develop the SUMMER BREAK thanks to a ROCKING part and joined the LIAISONS URBAINES team. 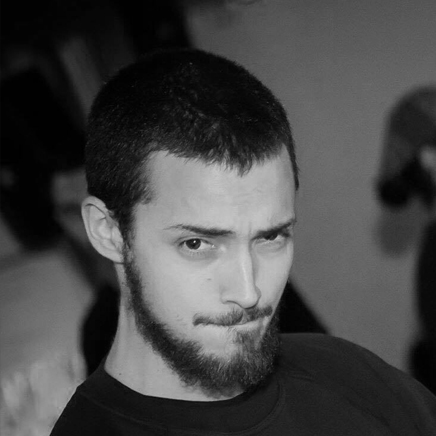 It was in the 2000's that Seb discovered Hip-Hop culture through its music; rap. But it was only seven years later that he started BBoying at the Maison de Quartier in Chêne Bourg; and after 3 years of training, it is he who begins to teach. In 2014, at the request of alumni, he opened a Break class at Villa Tacchini. He stops giving classes for professional reasons in 2015.

An important moment of his dance career? A trip to Cameroon that opens his mind to dance. He left with the association On Est Ensemble, in 2015, for an artistic exchange with local Hip-Hop dancers. An unforgettable experience !

He is also involved in the Geneva Hip Hop culture through the organization of events and provides regular assistance. He takes part in the summer break outdoor sessions and meets VEGA ROC and Mr RIDDLER. In 2015, he will join the festival's organizing team to work on its development. Nurse by profession, his interest will be growing for the health of the dancers.. 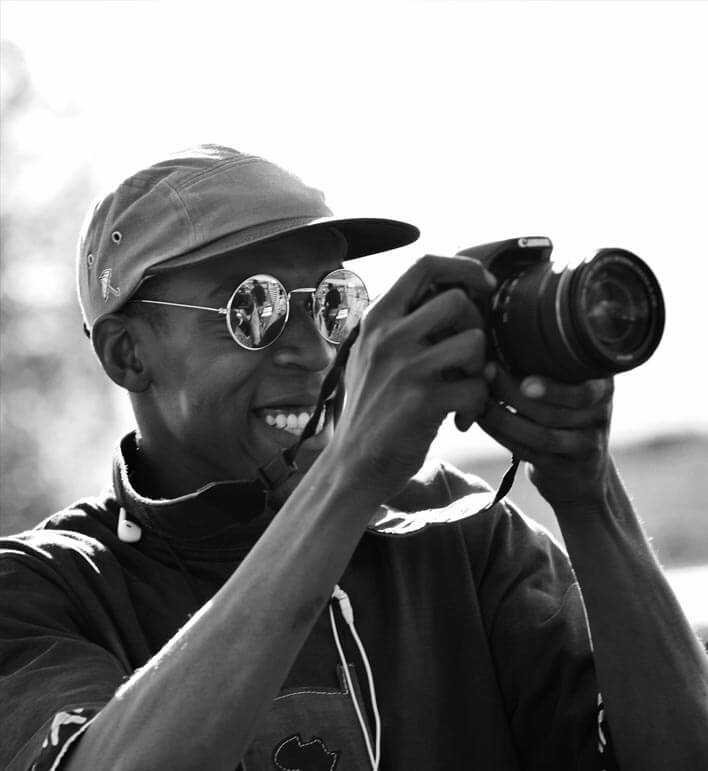 He has always been rythmed by the African sounds in his family originating in Burkina Faso and Togo. He discovers Hip Hop thanks to Rap and Graffiti but identifies himself better with BBoying since he was 16 years old. He soon became acquainted with other dancers and began traveling for shows and battles in 2008 with his first crew, "Alarash Zoo.

In 2009, he decided to start giving Break lessons in dance schools and neighbourhood houses of Geneva and on Vaud.

Having met VEGA ROC during training, it is in 2014 that they really get to know each other. They share the same desire to reflect on their environment and a desire for artistic development. MESSO is invited in 2016 to join LIAISONS URBAINES for its development.

The tale, the fable, the urban myth define the places and the popular culture of a region. However, in Geneva, few legends circulate. Even fewer recent stories. Pets, local wildlife, mythical creatures and unlikely chimeres, each place is potentially the lair of a fabulous creature or a surprising story.

Author Florian Eglin and artist Serval team up to fill Geneva with stories fabulous, all based on the real origins of each municipality, its fauna, its flora, real or mythological. The project is developed through frescoes, paintings and posters, interactive presentations, readings and follow-up on virtual platforms, all coordinated by the association Liaisons Urbaines.

From walls of several tens of meters to paintings on solid wood, from haiku to tale, the towns and cities of Geneva are enriched with a fanciful bestiary, but also anecdotes that recall their forgotten origins, their symbolic animals and the places that define them. Fabulae Genavenses is an artistic project that mixes the creative process of the author with that of the illustrator, both keen on mythology and local culture. Dive to the heart of the history but also of the fauna of their canton, the two join forces and advance this collection of urban and rural legends by being offered walls and facades by individuals and public authorities in the districts and municipalities of Geneva. From Carouge to Confignon via Eaux-Vives, fables develop and increase their follow-up of curious, fans and lovers of art and stories. 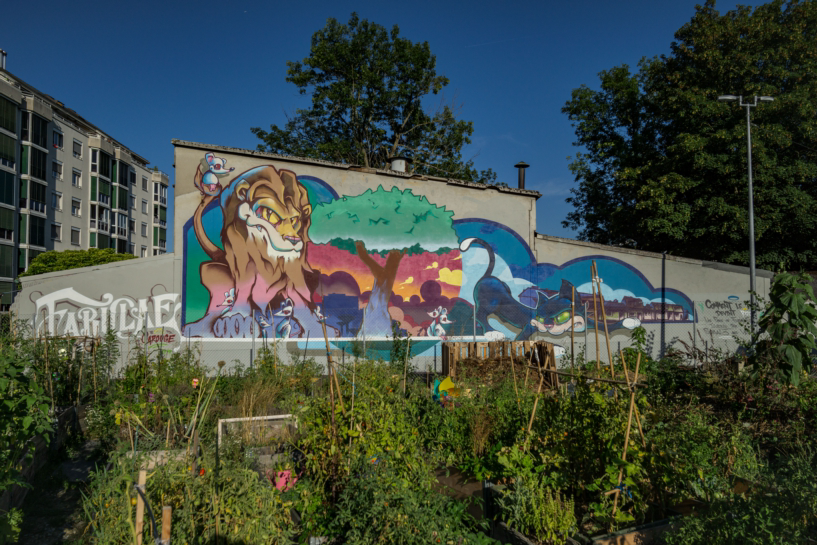 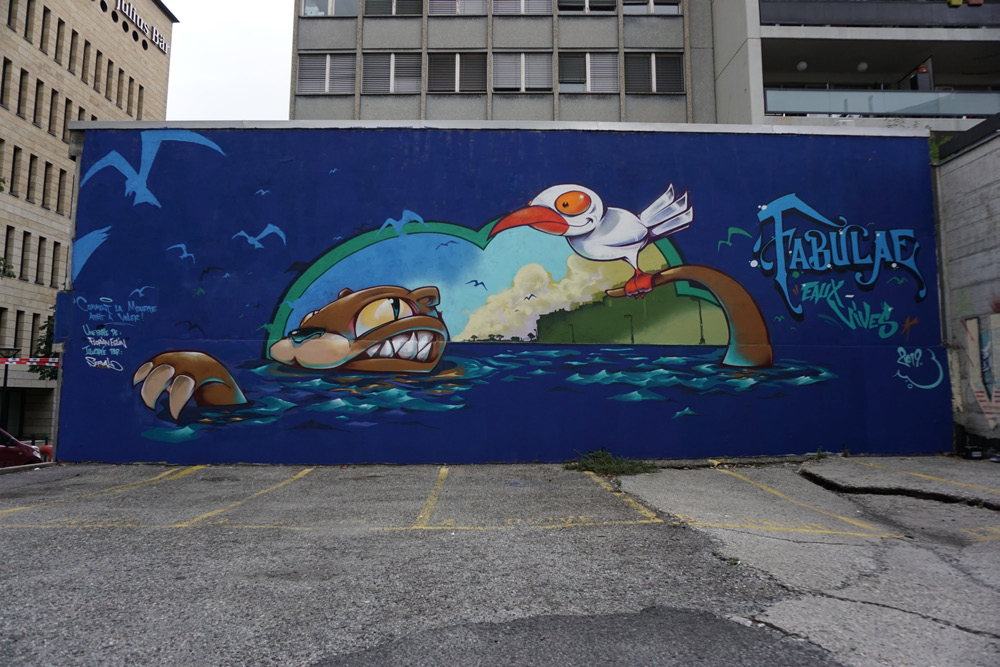 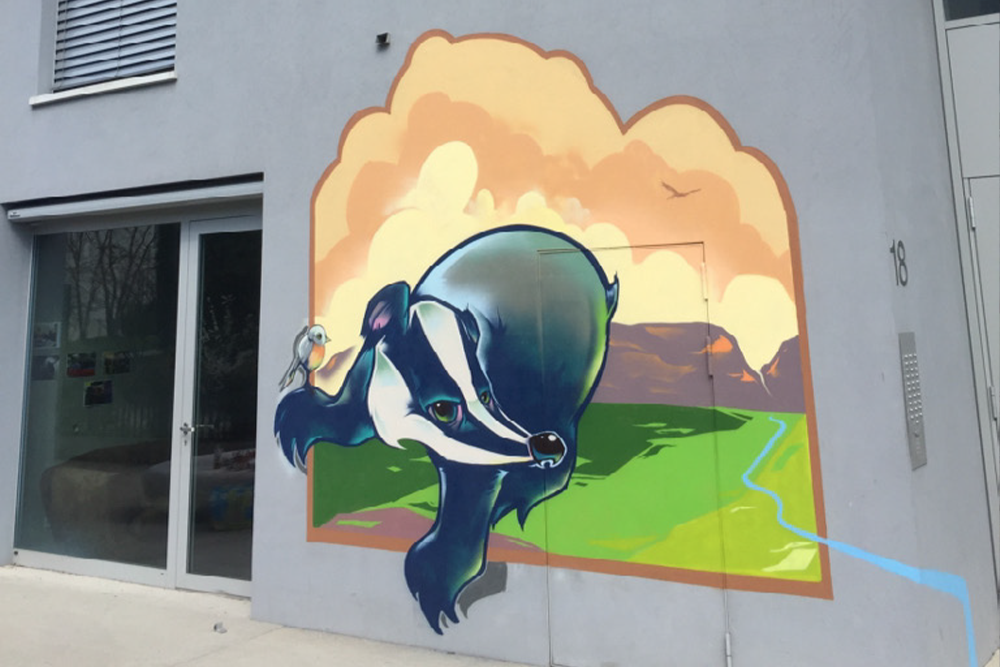 OUT.SIDE|ART is a gallery specializing in graffiti, post-graffiti, abstract and street art large format canvas. Very close to the artists we present, our primary desire is to show Swiss talents. For this, we always select artists of renown and recognized for the quality of their work and the stylistic development that they have been able to bring into their artistic movement or the genuine style they preserved. We can also present artists less known, but just as impressive for their graphic contribution

SUPPORT OUR ACTION BY A DONATION
TAX DEDUCTIBLE